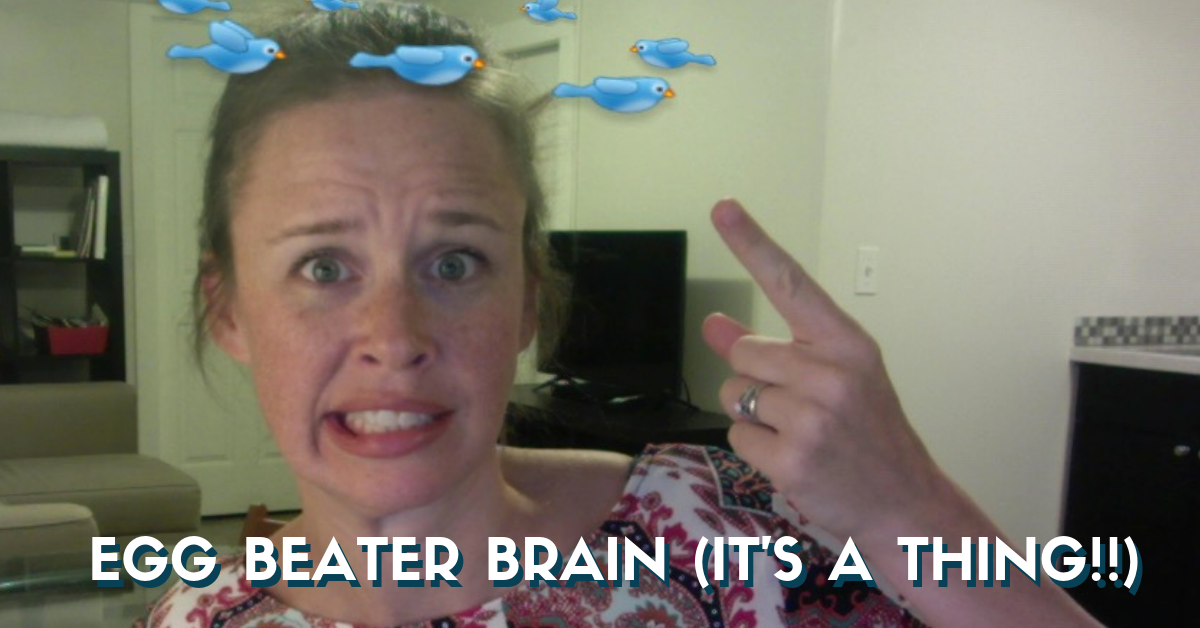 So… ever heard of egg beater brain?

Trying to do what you’re SUPPOSED to be doing…

And your brain goes into “egg beater mode” – thoughts spinning everywhere so it feels impossible to focus and move forward.

(If you suffer from bouts of egg beater brain, Martha has a free masterclass coming up to help and you can sign up here.)

I never got the concept of egg beater brain until Martha explained it to me about 12 bajillion times… you know why?

Because when ***I*** would have egg beater brain, it would usually looking something like me sitting at my computer working on something that was NOT on my to-do list for the day even though I was just positive it had to get done NOW…

By all outward appearances – and even to myself – it felt like I was working. Hard. Because I was. Yet I still wasn’t really getting anywhere. I still felt overwhelmed and unclear on what I was spending my time on… yet the time was still slipping away.

Sprinkle in a liberal amount of random baby photos from friends of friends I somehow discovered on Facebook and some YouTube clips of literally whatever… that’s what egg beater brain looks like for me.

And then of course, once I realized my head was spinning and I wasn’t actually accomplishing anything, I would go right to beating myself up:

“You’re such a procrastinator.”

“You need better habits. Your routine sucks. If you could just stay up one hour later and get up one hour earlier and put in a few more hours on the weekend, you wouldn’t be so behind!”

I’m grateful I got help with my egg beater brain because it’s a huge problem for a very surprising reason I’ll get to in a sec. But first…

My lovely entrepreneur, you may be dealing with egg beater brain if…

…You’re trying to get something done but you struggle to put a coherent thought together.

…You beat yourself up for not being more focused yet feel powerless to do anything about it.

…You find yourself staring out the window, watching a blinking cursor, or excessively checking Facebook when you really, really, REALLY need to be doing something else.

…Your work hours have somehow evaporated and you have the distinct feeling you’ve fallen even FURTHER behind.

…You’re mad at yourself for actually having a chunk of time to focus on your entrepreneurial passion project and it just feels like you’re wasting it even though you don’t want to!

And then finally, in desperation, you give up and go do laundry, pay a couple bills, open some mail, make a grocery list… because at least that’s semi-productive, right?

I’ll be honest, sometimes I do none of the above and just wind up on the couch watching something on TLC!

(If this is you, by the way, do yourself a favor and sign up for Martha’s masterclass. It’s called “Sustaining Momentum When You’re Stretched Thin and Burned Out” and it’s THE antidote to egg beater brain.)

The surprising reason egg beater brain is a problem for entrepreneurs…

It’s not because it prevents you from getting stuff done (although I will admit that is not ideal).

It’s not because it makes you feel bad (even though, if you’re anything like me, it ALWAYS causes a lengthy bout of self-criticism).

The REAL reason egg beater brain is so horrible is because it steals your momentum.

My members just call it CMS for short – I know it’s a mouthful! But the reason it’s called what it’s called is because you need each of those things in order to make meaningful, consistent progress in your business:

(1) Clarity gives you the information you need to figure out WHAT to build and WHO you want to target. When you have clarity, you have the shortest path possible to a sustainable business AND you get to start taking steps that actually accomplish something for you… and that’s what leads to…

(2) Momentum. Momentum is really nothing more of an accumulation of the right steps taken in the right order.

The thing about momentum though is that it is THE key to making online business easier than it ever has been for you in the past. Without momentum, it just feels like everything is heavy, hard, slow, unsustainable… it leads to burnout.

It sucks, basically. And…

(3) Success is the natural progression – the natural result – of momentum. It’s not really an end destination but rather something that natural occurs when you are consistently taking steps.

Without momentum, all the hard work you did gaining clarity on what steps to take does not result in the amazing gift that clarity is SUPPOSED to give you as an entrepreneur: ease. It just continues to be hard work.

And, without momentum, success becomes very difficult. Not impossible, but difficult, and definitely less fun.

Moving forward – with your business or anything else in your life – does not have to be this hard.

My fellow entrepreneur, how do we FIX egg beater brain?

Well, for the love of Pete, don’t do what I used to do, which basically amounts to beating yourself up.

When I was stuck and stalled and spinning in my head, I didn’t know what to do so I would just try to push harder:

Make a list of better habits I needed to develop.

Say “no” to going out with my friends just this one more time (yeah right).

Plan just ONE all-nighter so I could catch up but then not follow through because by 11pm-1am I’d be exhausted and then I would feel GUILTY for going to bed (Am I the only one who did this? god I hope not! I sound crazy to myself as I type it out… alas though, it’s the truth!)

Needless to say, none of the above fixed anything but only exacerbated the problem (i.e. MORE egg beater brain because yeah, less sleep plus more work plus the occasional sleepless night was a REAL BRILLIANT PLAN for a focused brain and productive hours, my friend!!)

So. How do you fix egg beater brain so you can reclaim your momentum and actually achieve some of that online business success you’re craving?

You need to stop turning to misguided, unsustainable solutions.

You need to start by actually looking in the right place so you can give yourself a real chance of fixing the problem.

My coach Martha has this really cool process she’s developed for getting people unstuck and back into momentum, without the hardcore inner drill sergeant thing I had going on.

The exact solution is a little different for everyone, which is why Martha put together her class. I hope you’ll come! I will definitely be there.

The class is called “How to Sustain Momentum When You’re Stretched Thin and Burned Out.” It’s going to be awesome:

Register for free <<< the cure for egg beater brain!

I really hope you’ve found this post helpful. If you have, please do 2 things for me: (1) leave a comment below and (2) share this post with 1 or 2 people you think would really benefit. Thank you!

I appreciate you,
Kathryn

I help entrepreneurs & coaches DIY simple, successful online businesses, on a budget, even if they're not "techie." Get started with my Tech Tool Resource Guide.
